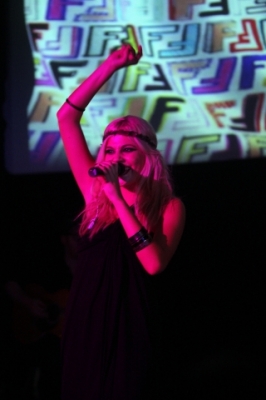 Last night the i’m-so-much-cooler-than-you fashion pack hit the Fendi O’ party hosted by Karl Lagerfeld in Paris. Rumour has it that Karl hand picked our lovely pop princess Pixie Lott (there I go with alliteration again) to perform at the event last night. You think after all the excitement at Alexander McQueen the fash-pack would want to rest their Louboutins – hell no! there was partying to be done!

Pixie herself must have thought she was on the catwalk as she wore THREE different Fendi dresses at the one party (she’s becoming the Brit version of Eva Longoria!) The pink dress is my favourite as it’s young and fun and the first outfit is lovely, but too casual and the maxi dress swamps her (love the headband though!) She wasn’t wearing any disney couture though, which is unlike her – although I do love the lockets and simple bangles. What do you think is her best look?