I’ve just read a fantastic article by Emily Gyben for Fashion Week Daily that I just had to share with you! Ever wondered about the man behind Serfontaine Denim (Mik Serfontaine FYI!) and the science behind that a-maz-ing fit! Well wonder no more! Here’s a taster of the article: 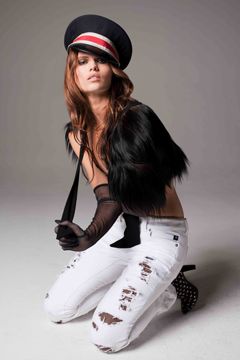 ‘When most people think of denim, they think of that ultimate basic–not so for Mik Serfontaine, founder of Serfontaine denim. The jeans guru has built his brand by embracing the latest in denim technologies to push their jeans further than Levi Strauss could have ever imagined. “We were the first to do anything with organic–in 2003 we launched an entire collection in organic washes,” said Serfontaine. “We invented the stitching detail known as rope stitch. We were the first to pioneer T400 stretch, the next gen of Lyrca, which has 10-15 times the recovery of standard Lycra. We were the first brand to launch XFIT, a bistretch fabric. There’s a lot of those things that we’ve pioneered.”For a real Back to the Future denim experience, Serfontaine fans in London have been hitting Serfontaine’s Bodymetrix bodyscanner at Selfridges–an ultrasound body composition machine that scans women, making it easier for them to find their perfect fit. “The whole thing for us is that we always want to empower women through our fit,” said Serfontaine.’

Don’t know about you, but I’m off to Selfridges to scan my bum! Here comes the science…